If your searching for a best picnic spot near by Bangalore or Mysore district. Visit to the Mysore Palace. It is best for one day picnic place with your family.

The Mysore Palace also known as amba maharaja palace, It is one of India’s most well-known and historical palaces is the pride of Karnataka and the official residence of the Wadiyar dynasty and the erstwhile Mysore Kingdom. The palace is faces the Chamundi Hills eastward and lies between centre of Mysore. Mysore is known as the city of palaces and this palace is within the old fort. Chamundi hills can be viewed from a distance of about 8 to 10 kms. Nestled at Sayyaji Rao Road in Agrahara, Chamrajpura, The Mysore Palace stands on land which was originally called a citadel or puragiri and is now called the Old Fort.

In the 14th century yaduraya built the first palace within the Old Fort back, The present palace was demolished and rebuilt several times. The present building was made between 1897 and 1912, after the burning and destruction of the old palace. Mysore Palace is also one of the famous tourist landmarks in india after the Taj Mahal, , with millions of visitors coming down here annually to get a glimpse of this majestic architectural marvel, spanning a mammoth 72 acres, complete with four arched gateways.

Interesting Facts About The  Mysore Palace

Mysore Dasara is the Nadahabba  or state festival of the state of Karnataka . It is a 10-day festival, starting with nine nights called Navaratri and the last day being Vijayadashami. The Hindu festival of Dasara, Navratri and Vijayadashami celebrates the victory of good over evil. It was the day in the Hindu legends when Goddess Durga killed the demon Mahishasura. The festivities included a special durbar It was during the reign of Krishnaraja Wodeyar III in the year 1805, when the king started the tradition of having a special durbar in the Mysore Palace during Dasara; which was attended by members of the royal family, special invitees, officials and the masses. 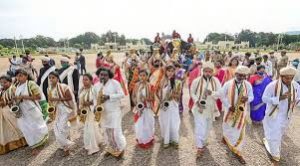 During Dasara exhibition which is held in the exhibition grounds opposite to the Mysore Palace. The exhibition was started by the Maharaja of Mysore Chamaraja Wodeyar X in 1880 with the sole aim of introducing timely developments to the people of Mysore. This exhibition starts during Dasara and goes on till December. Various stalls which sell items like clothes, plastic items, kitchenware, cosmetics and eatables are set up and they attract a significant number of people. 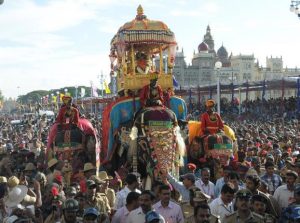 The main attraction of this procession is Jambu Savari the idol of the Goddess Chamundeshwari which is placed on a golden mantapa (which is around 750 kilograms of gold) on the top of a decorated elephant. This idol is worshipped by the royal couple and other invitees before it is taken around in the procession. Colourful tableaux, dance groups, music bands, decorated elephants, horses and camels form a part of the procession which starts from the Mysore Palace and culminates at a place called Bannimantapa.

The main attraction of the ten-day Mysore Dasara festival is the Mysore Palace which is lighted daily with nearly 100,000 light bulbs from 7 pm to 10 pm on all days of the festival. Various cultural and religious programs highlighting the dance, music and culture of the State of Karnataka are performed in front of the illuminated Palace.

Mysore Palace is the central piece of Mysore attractions. The sprawing of Mysore palace is located in the heart of Mysore city. Rather the roads out of Mysore city appears radiating from the palace. Mysore is known as the city of palaces. It is one of the famous historical place in India after TajMahal.