The garden itself is spread over an area of 240 acres and its construction was commissioned by the famous ruler Hyder Ali. It was finally completed by his son- Tipu Sultan- who designed the gardens keeping in mind the beautiful gardens of Sira in Tumkur District in Karnataka.

Apart from the exotic trees, visitors can also catch sight of some rare birds such as the Myna, pond heron, purple moorhen, parakeets, Brahminy kites, the common egret and much more. Apart from the stunning flora and fauna of the Lalbagh Botanical Garden, it has another striking attraction, which is the Lalbagh rock. This rock, which is said to be over 3000 years old, is one of the oldest rocks in the world and can be found in the center of the garden.

Lalbagh is not only one of the most well-developed botanical gardens in India with a wealth of exotic flora and fauna, but also a historically significant place. Hyder Ali who was the ruler of Mysore between 1761-1782, commissioned the construction of the garden. In fact, he was known for the many gardens whose foundations he laid and architecture he ordained during his reign as emperor.

The development of the Lalbagh Botanical Garden was then taken over by his son Tipu Sultan who added to the beauty of the garden by importing trees and plants of his own from faraway countries.The layout of the garden was based on the sprawling Mughal gardens that were being constructed throughout the Mughal Empire, especially the one at Sira- an important Mughal outpost in South India and a little distance away from Bangalore city.

The bi-annual flower show at the Lalbagh Botanical Garden is a spectacle to behold. People travel from far and wide from India and even from abroad to witness millions of flowers, thousands of plants and the incredible artistry that goes into making the figurines and flower structures.

The show takes place twice a year- once during January in the same week as the Indian Republic Day, and another time in August, during Independence Day. Each year, a different theme is chosen and flower arrangements are made according to the theme.

Plants and flowers are imported from all over the world and over 20 lakh flowers are used each year to make semi-permanent structures in various characteristic shapes and designs. The show takes place inside the striking Glass House which is located on the premises of the Botanical Gardens and goes on from 9:00 am in the morning until 6:00 pm in the evening. 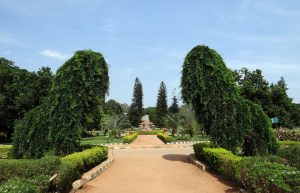 Lalbagh Botanical Garden is located at a distance of 38.8 km from Kempegowda International Airport in Bangalore. There are frequent bus routes that ferry between the two places. You can also book a taxi or hire a car which will take you to Lalbagh after a short 45-minute drive through the city of Bangalore.

The best time to visit the Lalbagh Botanical Gardens is during winter, which lasts from November to March in Bangalore. Even though the gardens remain open throughout the year, it can get pretty stuffy and hot during summer.

It is also pointless visiting here during the monsoon when the rain can prevent you from enjoying the full beauty of the garden. You should also plan your trip to the garden during January and August, which is when the flower show takes place every year in the Glass House.

What Not to Miss at Lal Bagh Botanical Garden

Apart from being a learning centre and a fantastic retreat in the middle of the city, there are several unique attractions that you can check out as well when you are there. Here are some features of the garden you must not miss:

The Glass House in the Lalbagh Botanical Garden is one of its primary attractions. Modelled after the Crystal Palace in London, this Glasshouse is a huge structure made of glass and iron which houses some of the rarer species of plants.

A flower show is conducted two times every year inside the glasshouse- once in January and another time in August- where guests are welcome to come and witness some of the most beautiful flowers and plants from all over the world.

Lalbagh Rock is definitely one of the most striking attractions in the garden. The rock is a National Geological Monument, placed in the garden by the Geological Survey of India. A small placard outlining information about the rock claims that it is over 3000 million years old, making it one of the oldest rocks in the whole world.

The Floral Clock is a large natural clock composed of various flower plants and shrubs, measuring 7 metres in diameter. It is placed in a garden that is also decorated with figurines from Snow White and the Seven Dwarfs, making it an interesting place for both adults and children to relax

Lalbagh Lake is a natural lake located just alongside the garden whose presence allowed the construction of the garden in the first place. Visitors can try out boating and picnics beside the lake, making it the ideal place to relax, despite being in the heart .

Places to visit near Lalbagh 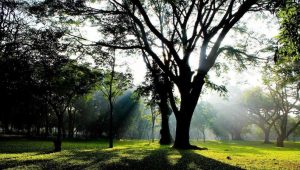 Located 2.3 km from the Lalbagh Botanical Garden, this used to be a much sought-after summer retreat for Tipu Sultan, who used to frequently stay at this palace. It is a two-storey structure which is now a museum. The palace also has manicured gardens, wooden structures and intricate architecture.

Bangalore Fort is located 2.4km from Lalbagh. It was built by Kempe Gowda in the 15th century and was renovated by Hyder Ali in the 17th century. Although there were initially nine massive gates, the Delhi Gate is the only survivor.

The Bull Temple is not only an incredible specimen of Indian art and architecture but is also the oldest temple in Karnataka. It is dedicated to Nandi- the loyal consort of Lord Shiva. It is 3.4 km from the botanical garden and is a place you must visit when you are in Bangalore.

Located 4.6 km from the Lalbagh Botanical Garden, Cubbon Park is an expanse of clean and organized greenery, right in the heart of the city. Gulmohar and silver oak trees grow in abundance in the park which is frequented by people for its fresh air and peaceful atmosphere.

Check Out For Top 5 Ports For Picnic Near Bangalore. 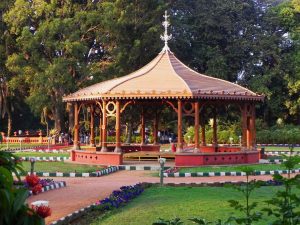 A haven for all nature lovers, Lal Bagh covers an area 240 acres in the heart of the city. The garden features rare plants of French, Persian and Afghani origin and has attained the status of a Government Botanical Garden. The Lal Bagh Rock which is over 3000 million years old is found here and is a major tourist attraction.

Beautiful Places To Visit In Pune For Couples