What’s the first thing that comes to your mind when you think of a vacation in Karnataka… Bangalore, Mysore?. Why not visit Chitradurga at vacation. Moreover visiting this place can give different vacation experience. Chitradurga is a important and famous district of Karnataka, India. This place is famous for the fort that was built in 11th century. Chitradurga is situated 200 Km from Bangalore city and is easily accessible by road and train. By the road It takes 4 hours journey. It is nice location for one day family picnic.

Chitradurga Fort is well known as Elusuttina Kote means the fort of seven circles and is one of the country’s strongest hill forts.The fort originally having 19 gateways, 35 secret entrances, 38 postern-gates and 4 ‘invisible’ entrances. The doors were made of strong and thick wooden beams locked with iron plates. Zigzagging pathways prevented the use of battering rams and slowed down enemy soldiers. The doors of the main gateways were, in addition, bristling with iron spikes to ward off elephants. 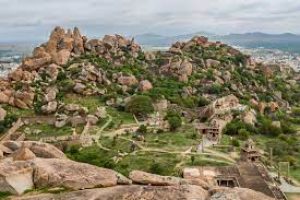 Chitradurga fort is famous for its sophisticated water harvesting system. Interconnected reservoirs stored and collected rainwater, which overflew from each tank flowing into other tanks below it. Such an effective system ensured that the fort never ran out of water. After filling all these tanks, the water used to flow to the moats round the fort-walls.

The chitradurga fort is the first and greatest monument that reviews in to the tourists by the indicating of the name of this district. This powerful fortress with 7 concentric ramparts is classified as ‘Giridurga’ means Hill fort, The complete fort built on rocky hills of giridurga. This fort having seven pinnacles, the name was “Chinmuladri”. Which has seven ranges that nearby a central hill called as “tuppada kola”, Which has hidimbeshwara hill and the shivalaya hill to its northeast and east directions respectively. Kahalebatheri hill to its western side and the Lal-batheri and Nallikayisiddappa hills are located in the southern side.The Bhimanabatheri and Jandabatheri are to the north of this hill. The surrounding valley with the fortification and the entire Tuppada kola hill is represented to as Meldurga that means ‘upper fort’. This improved region is circular on plan. The entire fortified region in about 300 m above ground level.

As we must see in the chitradurga fort is the Onake Obavvana Kindi. The name comes after a brave woman Obavva. It is connected with the famous attack of Haidar Ali on Chitradurga. Haidar’s forces were unable to enter into the fort, in spite of a long relief. They soon found a small crevice through which they could get into the fort. It was a very straight crevice , hardly confess a human being in a kneeling position. Obavva lock up there and saw the enemy trying to get inside. Displaying remarkable courage, she grabbed onake and killed each soldier getting inside.

The Fort is open from 6 AM to 6 PM on all days. Certified guides are available near the entrance who can be hired to give a guided tour and narrate historic importance.

Places to Visit Near Chitradurga

Chitradurga is famous for the fort that was built in 11th century. Chitradurga Fort is known as Stone Fort.  The stunning boulders and hillocks makes you feel of revisiting the history.